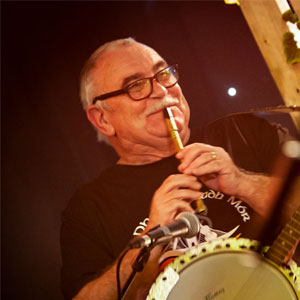 Brendan Molloy was born in Creggan, Derry. His first memories of Irish traditional music were in his home in Circular Road. As a boy, he was always encouraged to take part in Feis Doire Cholmcille, Slógadh, Scór, Fleadhanna and other various musical events. Brendan holds fond memories from playing in the Bogside community festival, which took place on Easter week in the early seventies when Feis Doire Cholmcille was postponed due to the troubles in the city.

During this time, Brendan met his mentor, the late great Dennis Heaney, who taught Brendan his core repertoire as part of St. Eugene’s Ceilí band. He played alongside Dennis for many years at Cèilidh in the city, throughout the North West and at concerts where Ann and Francie Brolly would be top of the bill. Traditional Irish music was the centre of Brendan’s life as a teenager. There was not a hall in Derry city his band did not play in, from the Guildhall to the Rialto, to Union hall and the AOH. Brendan developed his music over these years becoming competent in the piano accordion, tin whistle, banjo, mandolin, and guitar. Of course, he wouldn’t shy away from singing a song or two either!

In the eighties, Brendan moved to Africa, where one of the best St. Patrick’s Day music gigs he ever played was in the Canadian embassy in Ghana as a guest of honour. As a well-travelled man, he brought his music around Ireland, Britain, Europe, West Africa, USA, the Middle East, Lebanon and Syria.

When Brendan met his wife Maureen, he moved to Mullingar, Co. Westmeath, the home of Comhaltas! He often enjoyed sessions with Aodhán and Colmán Ó Muineacháin and was even known to do a tune on the mouth organ with the legend Noel Battle, as a young man.

In 2000, Brendan moved back to his hometown, Derry and became immersed in promoting the culture among young people. He mentored grupaí ceoil and bands bringing them to competitions and events all over Ireland and beyond. He introduced his daughters, Siobhán and Miriam to the music, song, dance, and language and ensured that they carried on his legacy and love.

Brendan is now well-known in official Comhaltas circles as the Chair of Craobh Baile na gCailleach CCÉ and chair of Co. Derry CCÉ. Brendan Molloy is a wonderful custodian of Irish culture and is delighted to be part of Fleadh Dhoire Mhór 2020.