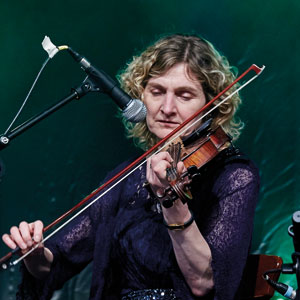 Josie Nugent (Fiddle) A native of Co. Clare and multiple All-Ireland fiddle champion. Josie grew up surrounded by a rich variety of notable traditional musicians including Martin Hayes, Tony Linnane and Francie Donnellan. She has performed and broadcast extensively and previous releases include: Fead an Iolair with na Casaidigh; Hills and Hollows with her sister Mary, and The Caves of Cong with Brian Stafford. Josie has collaborated widely with internationally renowned musicians such as Jackie Daly & Johnny ‘Ringo’ McDonagh of DeDannan, sound designer and composer Guillaume Beauron (Game of Thrones) and South African percussionist Eugene Skeef.